George Jamell is the school bully who refers to Mona, Lily and Charley as a "bunch of babies in Halloween costumes" and picks on Charley most of the time but is not that tough when confronted.

George Jamell is a young boy with a fair complexion He always wears a blue Baseball cap on his head backwards with a Black tank top shirt dark gray jean pants with white socks with navy blue Sneakers.

He is often seen with Angela. Not only is he a bully, but he's also a tattletale extraordinaire. If there is mischief occurring to which he is not a party or if students haven't done their homework, George is there to tell Ms. Gotto. George is thick, mean, and like all successful bullies, he has a preference for bullying those smaller than him. Worst of all, his tattling has made him the Principal's pet, so the Principal won't lift a finger to discipline him. That and the fact that he is Principal Shawbly's nephew. 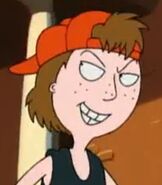 Add a photo to this gallery
Retrieved from "https://monathevampire.fandom.com/wiki/George_Jamell?oldid=10686"
Community content is available under CC-BY-SA unless otherwise noted.