This is a page about the main protagonist of the franchise. To see other uses of Mona, see Mona (disambiguation).

To pretend to be a vampire (succeeded)

Her mom getting angry, crocodiles

Continues pretending to be a a vampire and married by Charley

Mona Parker AKA Mona the Vampire is the main protagonist of the television series as well as the books. In the TV series, she is voiced by Emma Taylor-Isherwood in television series, Kelly Marot in the French version, Angela Quast in the German version, Cristina Hernández in the Mexican Spanish version, Carmen Ambrós in the Castilian Spanish version, and Yang Jeong Hwa in the Korean (Tooniverse) version. She is the only daughter of the Parker family because it has seen in all of the episodes that she has no siblings.

Mona is characterized as a young, extremely cute and tomboyish 10-year-old girl with a vivid imagination. She believes her hometown is overrun with supernatural monsters or other creatures or entities and, as Mona the Vampire, plans to stop all of them and save her town on a daily basis. Despite her cuteness, she also enjoys watching monster movies and reading comic books, which is one of the main inspirations of this idea. Her alter-ego, Mona the Vampire, has a "vampire sense" which "tingles" every time something unusual or odd happens.

This article is a stub. You can help Mona the Vampire Wiki by expanding it.

Her pajamas are red with black bats and black collar.

Princess for a Day

Mona and Charley at the dance 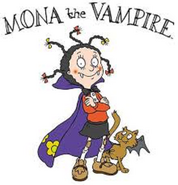 Add a photo to this gallery

Retrieved from "https://monathevampire.fandom.com/wiki/Mona_the_Vampire_(character)?oldid=10668"
Community content is available under CC-BY-SA unless otherwise noted.